Lighting throughout the station is primarily produced by light bulbs and light tubes plugged directly into sockets on walls. These are powered by the ships engine and SMES system, much like every other electrical system on the station. They are controlled through either light switches built into some rooms, or the APCs of each room (where they can be turned off by those with access, or switched between day and night mode by anyone.)

Lights are generally rather fragile and can be easily broken with very little brute force, so do be careful when interacting with them that you do not have a crowbar in your active hand! They are also prone to breaking randomly in power surges, though generally an entire room will lose all of it's lights simultaneously.

Lights that are broken can be replaced easily by a janitor, who has a large number of spare bulbs and tubes, and a handy light replacer tool that can replace broken lights in a single click! Lights that aren't broken shouldn't be touched with your bare hands, those things are hot and will burn you! Instead, either turn the lights off first, or wear gloves. Be aware that sticking metal objects in empty sockets can lead to nasty shocks, but hopefully you were taught this as a kid, right?

All of the lights on the station operate in two modes, Day Shift and Night Shift lighting. The night shift lighting is a slightly dimmer, gentle yellow light that simulates late night lighting. The lights switch between these every so often automatically, to help stimulate some species circadian rhythms. However, they can be locked to one mode or another via the rooms APC by anyone. 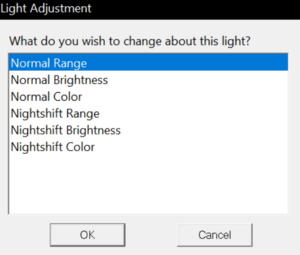 An example of the light adjustment window 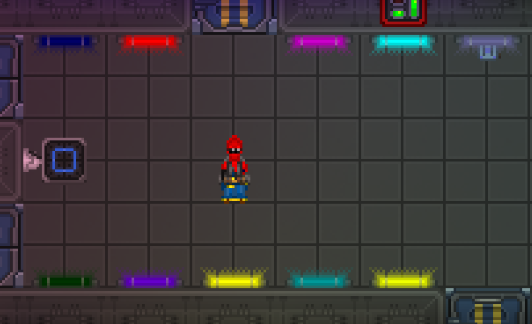 Any light bulb or tube can be modified to have a different properties, such as the intensity of the light, the colour of the light, and the range that the light can reach. To adjust these, you need the following equipment:

Simply take out a bulb from a socket, and use a multitool on it, and you will be able to freely change it's properties. These are changed seperately for day and night shift lighting. When you are happy with your adjustments, simply plug the bulb/tube back into the socket! Modified lights will remain that way for the remainder of the shift, unless they are replaced, broken or modified again.