Difference between revisions of "Guide to Xenobiology"

Xenobiologists are in charge of the creation, care, and eventual culling and harvesting of 'Slimes', which are extremely dangerous to handle without the right equipment.

Generally speaking, you and your slimes will be at a remote facility, far from the main station, referred to as Xenobiology. It has many cells to place your slimes inside of, where they cannot get out without some serious effort. Each cell has a disposals chute, used to safely give food to the slimes inside the cell without endangering yourself, as well as a button to lock down that specific cell, in case the glass breaks or you have something even more dangerous than a slime inside. Elsewhere, you should have a Processor machine, which is used to harvest dead slimes and recycle food. When recycling monkeys, make sure to insert more than one per recycle, otherwise the machine will return no monkey cubes when turned on.

You'll need these items to do your job.

Optional but highly useful things to acquire to make your job easier.

When you start your shift, you should have two grey slime cores, and two other slime cores of a random color, all in separate cells. When you're ready to start, you can inject one of the grey slime cores with ten units phoron to spawn a new grey baby slime. After a few seconds, the new grey slime will stop being incapacitated, and will promptly try to escape to eat you. You should use either your taser or your baton to stun the slime, wait several seconds until they try to attack again, then and stun them again. Continue this process until examining them show that they 'look rather obedient'. From then on, that slime shouldn't, unprompted, attack you or your fellows, and future generations from that slime will be obedient after one justified stun (more on that in the 'Slime Psychology' section). Repeat for the other grey extract in the other cell. One of these cells should be dedicated to growing grey slimes, so you will have a renewable source of monkey cubes. If you run out of monkey cubes, you will need to get more from Cargo, which could take a while.

When subjugating slimes, there are some tricks you can use to keep yourself safe. If a slime is bashing against the windows or windoor, you can stand next to the interior windoor (the one closest to the cell itself) and use your baton through the windoor to stun the slime. The slime will not be able to hit you through the windoor, but you will be able to hit it. If the slimes stack on top of one another to bash at the windows, you can aim past the slimes and fire the taser - the taser shot should automatically hit the ones that are hostile. Be careful to not fire too many shots when doing this, as the taser shots will eventually hit non-hostile slimes if there are no hostile slimes left.

When your 'grey' cell slime reproduces, you should always ensure that one grey slime is always alive inside, and kill or separate the rest into different cells. It is a good idea to keep one grey extract in reserve in case all of your greys are lost, for whatever reason, as injecting a grey extract will create a new grey slime.

Cells should never have more than one color of slime inside, as they tend to fight each other and it can be difficult to tase them due to other slimes being in the way. Once again, aiming past the hostile slimes should hit the hostile slimes.

Monkeys on VoreStation can be carried in your hands and on your head, which can be useful for transporting them around and leaving them in cells or the disposal bins.

Remember to recharge your baton, taser, spray bottle/extinguisher, and anything else between feeding the slimes, so you're ready for the new generation of hostile slimes that'll turn up once the slimes reproduce.

Some colors are more useful than others. For instance;

Slimes can kill you in many ways, dependent mostly on their color. Wearing the correct armor when handling a specific color can make survival much easier. Xenobiology has been provided with a large range of specialized clothing to wear, when the need arises. 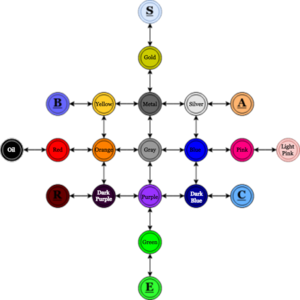 Here is a chart of all the slime reproductive color cycle.

Slimes start their life as a small baby. Don't be fooled, it is still very dangerous and capable of killing anyone careless. Slimes require food, or else they will die. Starving slimes have been known to turn on their captors.

When fed enough, baby slimes will grow into an 'adult' form, which makes them tougher. When the slime eats enough as an adult, it will reproduce, by splitting into four new slimes. There is a small chance that one or more of the new slimes may mutate into a different color. If this happens, the slimes occupying the cell should either be disciplined to obedience or separated by color to different cells, as undisciplined slimes will fight each other to the death if they are separate colors. A slime taser is useful for this, as it can shoot through the glass of the cell, though hitting the undisciplined slime(s) can be tricky. Shooting past the slimes may help, as mentioned earlier.

Slimes can be subjugated by force by various means, usually using either the slimebaton or the taser, indicated by examining the slime (so long as it's not incapacitated by a stun) and seeing 'It has been subjugated by force, at least for now.' The slime will give a sad face, however it won't harm humanoids for a little while. If it was trying to kill something, it will stop doing so.

Successfully removing a slime from someone it's eating will also discipline it.

Beating the slime with a heavy object repeatively will sometimes discipline it, however this is not guaranteed.

Giving 'justified' disciplining to a slime will cause it to become more obedient, making future disciplining last longer. Sufficient amounts of obedience can make discipline last forever, indicated by examining the slime and seeing 'It looks rather obedient' under its description. This obedience will partially carry on to generations derived from that slime - slimes reproduced from obedient slimes will only take one act of 'justified' discipline to become obedient. Note that rather obedient slimes are still dangerous, as they will still defend themselves against attackers.

An act of discipline is 'justified' when it is done while the slime is trying to harm or eat someone, otherwise it is 'unjustified'.

A slime securitron will automatically engage 'guilty' slimes, but leave innocent ones alone.

Giving 'unjustified' disciplining to a slime will cause the slime to hold resentment towards their captors. If pushed too far, the slime will enrage, and try to kill everything it can see, so try to not be like Security.

Sometimes it is possible to calm down a raging slime with enough disciplining, however it is generally easier and safer to just kill it with a slimebaton and fire extinguisher/Space Cleaner.

A slime securitron will engage an enraged slime in a fight to the death, not stopping until the slime dies, or the securitron is destroyed.

Slimes appear to be capable of slow, simple speech, and will respond to various topics and requests that it hears.

If a slime likes you enough or is sufficiently obedient, it can be given certain commands, such as to follow you, to stop attacking/eating/following things, or to attack a specific target. You'll need to say the slime's 'name', or say 'slimes' to give the command to all the slimes that can hear you.

You can also say hi to them, and they will respond.

All slimes have various means to harm things. The most common attack is a 'glomp' which will hurt whatever it hits, and will hurt more if the slime is a big one. Some slime colors will cause a substance to enter your bloodstream if it successfully hits you. Sufficiently thick clothing should stop that from happening.

A more dangerous 'attack' is that the slime may decide to attach themselves onto their victim, which is how slimes eat things. This causes severe cellular damage to the victim, and will require advanced medical treatment to fix, so you are advised to remove the slime from yourself or your co-worker ASAP if it latches on by clicking it with a disarm intent. A slime securitron will rush to you if this happens to you. Slimes won't try to eat inorganic entities, instead glomping them.

Slimes can also incapacitate its target in two ways. First, it can try to knock down its target by shoving them down, which stuns for a brief moment, however it is not guaranteed to work. Second, it can use stored up electricity to shock a target to stun them for a longer period of time. After downing a target, a slime generally will try to eat it if it's organic, or continue glomping it to death if not.

Slimes will never willingly harm another slime of the same color, or a Promethean. When under the effects of discipline, a slime will not try to fight or eat humanoids or robotic entities, but will still eat monkeys.

A slime pacified with a slime docility agent will never harm anyone and is incapable of doing any harm. Pacified slimes will also never enrage, even with a red slime extract.

An enraged slime will ignore the effects of discipline.

Slimes come in many colors, and most of them have unique properties. Their extracts will do different things depending on the color, as well. Non-obedient slimes will attack slimes of a different color, so disciplining them to obedience or separating them with different cells is required.

When slimes reproduce, there is a chance that one or more of the offspring will mutate into a different color. The chance is usually at around 25%, however this can be increased or decreased by giving the slime a mutation agent or stability agent, which can be obtained from a red extract and blue extract, respectively.

Each color, except for the grey slime, will have a specific trait unique to that color, and may warrant additional preparation before handling. A list of slime colors is provided below.

Below is some leftover information from the old guide. Please inform the staff where and if this information should be replaced back into.