VOREStation is very, very different from other Space Station13 experiences you may have had. While we use roughly the same mechanics, mostly of Baystation12/Polaris13 origin - our gameplay, lore, goals and general intended atmosphere differ significantly even from our vorny downstreams. 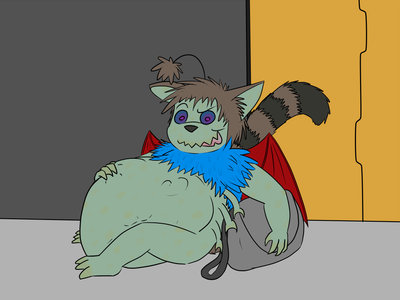 Yeah. Let's get that out of the way right off the bat.

That's not to say that everyone here is explicitly in it for all vore, all the time, but if you're freaked out by the fact that it happens, then you may want to look elsewhere for your 2D spacemans fix.

Do note that we consider respecting OOC preferences paramount. If you are into a particular niche of vore and feel uncomfortable with the rest? You are more than welcome and even protected! Just make sure you do not shame those who enjoy other aspects of it.

We have ongoing continuity.

Unlike most servers, the roleplay is constant. As in, there's no reset at the end of the shift, there are very rarely any retcons and anything that happens in a previous round is considered "canon" in subsequent rounds. And yes, the end of the round after the shuttle docks is in-character too, so no end-of-round grief-fests or killing sprees. The upshot of this is that you can have a long ongoing RP with another player that spans several shifts, weeks, or even months.

Exceptions may arise for private scenes. Dying as part of a scene requires forgetting everything related to it barring concessions by your pred/dom (such as for willing scenes). This is to protect people doing unwilling scenes from consequences for doing what this server is for. Beyond this, for private and isolated roleplay in the dorms, you are always free to reach out to your partner for retcons.

We are an extended-mode, HRP server

We do not have antags. Occasionally, non-crew may still show up for a variety of reasons: trading, relaxing or predation or unique event interactions. It is vital to remember that these are your fellow players who are here for both their own fun, and enhancing yours. Wordless, non-justified hostilities may qualify as rule breaking.

High RP does not mean stick up the ass seriousness, levity and light-hearted, comedic interactions are more than welcome provided they are done in an in-character manner. Roleplaying is always expected (with self-evident shift to mechanics where it makes sense), please do not ignore others just because your prefs do not match. Also, please do not play characters who know everything just because you are an OOC spaceman veteran.

We have a well fleshed out lore. We are not comically grimdark, but neither a utopia.

The year is 2322 (current date + 300 years). Humanity had discovered phoron at the turn of the 22nd century and had seen an explosive rise in population and territory as a consequence. Turmoil, growing pains accompanied this expansion - leading to break away states following a whole plethora of political ideologies - some more, some less pleasant to live under.

The primary human faction you are most likely to hail from is the democratic, corporatist Sol-Procyon Commonwealth. Earth had gone through climate change and horrific wars but recovered to be a planet full of arcologies to give space for wildlife to flourish. Sapient rights are begrudgingly respected even by powerful trans-stellar corporations like NanoTrasen. Colonial strife underpins much of the Commonwealth’s life: wealthy core worlds such as Sol, Proxima Centauri and the rest of the voting member states exploit and oppress the unrepresented territories and colonies for a near post-scarcity lifestyle. Colonies eke out a living out on the harsh frontier, protected by laws yes - but laws they have no say in the making.

But out in the Periphery where Virgo-Erigone is located, such politicking may be far beyond your consideration. Indeed, you may even be an alien from one of our many canon species, or some minor civilization you invented all for your character. NanoTrasen hires all, employs all - while the upper brass may hold speciesist beliefs and while the Commonwealth may try to favour humanity, working on one of many frontier NT facilities, it is VERY UNLIKELY to come up amongst the crew. Yes, this means even “dirty xenos” (tajara, unathi, zorren and so forth!) can become captains!

Synthetics here are done completely differently. Three “species” of synthetics exist: cyborgs, robots and drones. Cyborgs and robots are treated as equals of humanity - sapient, with all the rights and responsibilities that come with it. We have gone past the barbaric practices of forced cyborgification (Outside the borders of more unified interstellar nations like the Commonwealth, such as in deadspace or in the Elysian Colonies region, these laws and moral conventions are significantly more lax if not nonexistent.".). Drones though? Many Beta drones who may count as sapient are denied this claim by the Commonwealth, despite support from the likes of the Ares Confederation or the Salthan Fyrds. Those ‘borgs’ who work using a brain-in-a-jar (MMI) retain their identity, individuality and memories the vast majority of the time since they were organic.

Unlike other servers where humanity is the strongest and oldest species, aliens here have their own way of life, history and means of achieving interstellar travel! The Tajara are an ambitious culture rapidly expanding, terraforming and growing. The Unathi are an ancient power who care little for humanity, for they have the skrell to contend with. Even the Zorren, who might seem ‘backwards’ at first are more than capable of getting off their world without human coddling.

If you wish to play one of the canon species, it is highly advised to read the Backstory. You need not read all of it, but it is highly recommended as it helps with placing our setting’s intended vibes, enhance your immersion and give you hooks for such things as: “Why am I working in the ass-end of space?”, “Is living here an improvement or downgrade from where I am from?” and approaching other people “Sure, as a Rapala I hold no allegiance to Unathi, but it is hard to get over.”! And then - there’s the Zorren: natives of the system we exploit for its phoron - they have rich lore, and being a keystone species - should be given extra care.

Whilst the character set-up window lists a whole bunch of antagonist roles, none of these are ever used here. The syndicate as you know it from other servers is completely different here, and generally refers to a more broad "dark-web" type network of criminal organisations. This will very rarely come up, and you might never encounter it at all. Generally, your characters won't even know that this criminal network exists, it's not something that they're likely to have encountered in their lives. There are no terrorists trying to sneak aboard the station to nuke the place, there is no space wizard flying in and shooting fireballs (speaking of which, there is no magic in this setting either). In staff organised events, however, the crew may encounter villainous entities such as monsters from the dark, rogue groups of merceneries and other dangers. These are generally played as story moments within our continuous canon.

The long and the short of this though is that: No, you should not be referencing the terrorists in red spacesuits working for the Syndicate as if anyone will know what you're talking about. There is no interstellar Syndicate hellbent on nuking NanoTrasen facilities here.