Difference between revisions of "Proteans"

Proteans are less a "species" in the evolutionary sense of the word and more a body type that a person can inhabit. It can be considered an additional type of synthetic crew member in addition to normal 'synthmorphs' and cyborgs. Unlike other species, they aren't from a single point of origin nor do they have any specific history or timeline. Instead, the characters that now inhabit a protean body could have originally been a Tajaran for example, having been resleeved into a protean body, just like they could have been resleeved into a Unathi or any other species.

The limiting factor on proteans is legality and cost. Self-replicating nanoswarms are heavily regulated in most civilized space out of fear that they could turn into walking grey goo[1] scenarios. They also tend to be relatively new technology, and though useful, manufacturing pipelines and the legal hurdles required for production keep the cost high, and the market narrow.

In a way, they are simply a continued expression of Nanite implant framework technology taken further down the road - instead of simply assisting solid body synthetics and humans, nanites form body and functions ad-hoc and in-situ, with only relatively few concrete and solid parts needed to make a chassis capable of manipulating the world.

Proteans are a relatively new technology, but not exceptionally uncommon, with some synthetics deciding to shed their solid-state bodies for a much more fluid user experience or organics embracing the shapeshifting ability this technology offers.

Proteans are essentially a swarm of microscopic machines, each capable of linking to each other and arranging themselves such as to impersonate shapes. Imagine them like a self-building play bricks set, except the bricks are microscopic. The resulting shapes can be many, though it's far easier and more energy efficient to replicate shapes and structures that one has blueprints for, which means that they tend to emulate the shapes available from cyberlimb manufacturers, as these blueprints are widely available and easily programmed into the nanite swarms.

When not occupying a particular shape, they can simply collapse into an amorphous blob. Though a simple 'blob form' has no hands or fine manipulators, the utility of such shouldn't be underestimated. They are capable of fitting into small spaces (such as vents) and spreading themselves flat onto surfaces. Doing such allows them to easily hide or rest without expending much energy.

Having no structures to mend or wires to replace, they can't be repaired by Roboticists or the like, instead requiring a supply of steel which can be broken down and converted into more nanites for their swarm bodies.

Proteans have no real unified history - they are not an unified culture, nor do most think they necessarily need one. After all, it is simply another shell for an ego to impart their will upon the world. However, the advent of the technology could be used instead to describe the origins of Proteans in the Coreward Periphery.

The first recorded Protean comes as early as 2200 in the Elysian Colonies. Proteus, a member of the enigmatic Kitsuhana Heavy Industries, performed there in several concerts to show off the music genre he proclaimed to have invented - Post-Post-Modernity Rejection-Blues. While nobody was really interested in it, his unique body form of three solid “organs” and a swarm of nanites piqued academic and popular interest, dubbing this particular synthetic configuration “Protean”. When other nanite-based synthetics were sighted, especially from the Skrell and later in the Hegemony War, “Protean” stuck around as a general term for them.

With the advent of NT and Morpheus acquiring the first black box NIFs from an unknown source (most likely either a gift or careless trade from a more advanced species), knockoffs of this technology began to spread like wildfire, and with the NIF technology came a logical upscaling of such, leading to human and alien Proteans based upon the KHI template with their three organs.

While first generation swarms were largely experimental, in the Year 2320, second and third generation models are far more commercially available within the Human Diaspora and therefore in the Coreward Periphery.

There are many benefits to choosing a Protean form instead of a solid state synthetic - a relative ease of maintenance, the exhilarating ability to express themselves in shapeshifting and taking up surprisingly little volume if they so choose. However, an inherent fragility, a large upfront expense and the loss of a solid, concrete physical form might dissuade less determined people to embrace a fluid existence.

Many Trans-Stellar Companies produce their own variants of Proteans, with performance profiles largely the same except for affectionados or specialty nanoswarms used in extreme conditions or military applications. Proteans seem to be a common progression in robot technology, as there are reports of older, more advanced species using them as well, such as the Skrell or Unathi.

Due to the inherent conservatism and bio-chauvinism of the Terran Commonwealth, Proteans are required to have a PAN ID card to signify they are sanctioned to operate nanotechnology within Commonwealth or Corporate Space. This ID is part of the reason for the high upfront cost, as it costs quite the pretty penny to acquire.

Many newer, formerly organic Proteans are indebted to a TSC for this reason.

Depending on the colony itself in the Demi-Monde, some people embrace Protean bodies as the new vogue or outlaw and hunt them within their own majesty space. After all, it is the Elysian Colonies. They can never agree on such things. Elysian Proteans are usually a corporate bought chassis with an imprint of the mind of a person. Some have restrictions and shackles set in their Orchestrator Module (see below) to ensure compliance. Some are unrestricted. Some restrict organics and other synthetic forms instead.

The Ares Confederation itself happily takes in any Protean that wishes to join their ranks, not caring much about their physicality and rather more if they are a good citizen or not. Individual member states might vary slightly, requiring a Protean to license themselves before operating in their states or forbid them to perform certain jobs. Overall, however, they are accepted as part of the expression of synthetic intelligence.

The Fyrds do not care for Proteans if they cannot fight. Salthan Proteans are required to serve in the military same as everyone else. In that regard, they are strangely egalitarian.

Proteans have three solid pieces suspended inside their bodies, and are the only 'internal organ' equivalent they have. Organs marked 'vital' will immediately kill the protean if destroyed or removed.

As mentioned, proteans can collapse their shape to their "natural" form, which is just a swarm of nanites. This changes the gameplay for them in several ways:

This form is usually optional and can be freely toggled with the 'Toggle Blobform' button in the Protean panel, however when a Protean is at 50% health or less, they will be forced into blobform until they can find the time/metal to repair themselves. Stored steel will start to be consumed to repair any damage (replacing any lost nanites). Blobform proteans can store steel by attacking the stacks, or having someone click them with the stacks on help intent. This is rather important since they don't have hands to use the 'Store Metals' button with. 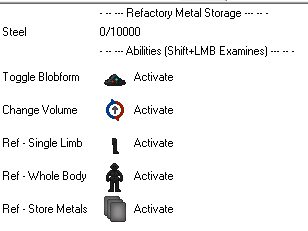 This is what you will see in your protean ability tab. are listed directly from top to bottom on the left.

Proteans have a verb panel separate from the rest that displays some information about their status along with several ability buttons, which are described here.

You will gain the following instant perks when storing these types of metals:

Under the 'Abilities' tab, they have several abilities they share with other shapeshifting species: