From VORE Station Wiki
Revision as of 14:51, 6 October 2015 by Aces (talk | contribs) (Created page with "{{GetStartedHeader}} Congratulations on your employment by NanoTrasen. Make sure to check out the other Starter Guides as well as the Job Guides. Space Station 1...")
(diff) ← Older revision | Latest revision (diff) | Newer revision → (diff)
Jump to navigation Jump to search

Congratulations on your employment by NanoTrasen. Make sure to check out the other Starter Guides as well as the Job Guides.

Space Station 13 is a multiplayer roleplaying game developed using the BYOND engine. In Space Station 13 (from here on to be referred to as SS13 or BS12, short for "Baystation 12," our specific variant), players take the role of workers on a space station. There are many different jobs available, and each player chooses and plays a role in the space station.

Baystation 12 is a heavy roleplay server. The choice is not optional; it is enforced. Should you be new to roleplaying, consult A Crash Course in Roleplaying. Should you still have questions, ask them at the BS12 forum.

These will put you in the running for the role of various antagonists. As a new player, it is strongly recommended that you set all of these options to no until you have had the opportunity to play the various game modes as a normal crewman. Should you be chosen to play an antagonist without wanting to, tell an admin via Adminhelp that you are new and do not wish to do so. 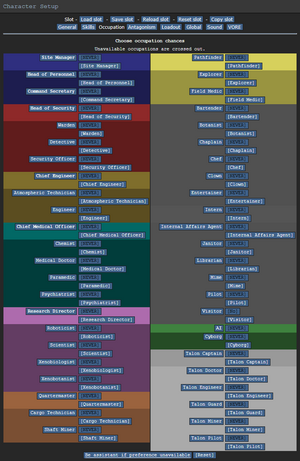 The joining and setup panel.

When joining a game in progress, you'll spawn on the Arrivals Shuttle and will be introduced to the crew by the Arrivals Announcement Computer. From there, you can either try to find your workplace and get started, or just explore the station a bit. 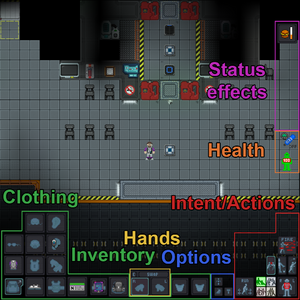 The Space Station 13 user interface, and a view of the arrivals shuttle.

This is a general guide to the game interface; note that it won't be accurate to all UI styles, nor are all the elements shown in the image at right.

Baystation 12 is a roleplay-heavy server, and so your interactions with those around you are going to be very, very important. You won't get very far with pointing-and-clicking alone, so there are several basic commands to remember when dealing with other characters on the station:

Whisper "Don' bloody move, yeah, or you're a dead man.

There's a couple of things to do to help you settle in at Baystation 12 once you've gotten the hang of the game:

Welcome to Baystation 12 and enjoy your stay!