This article or section is based on Vorestation's legacy lore.

This article or section is severely outdated, and is no longer canon as of May 2020. If this lore is still relevant to the server, you can help by updating it.

Sergals are a race of furry shark-like headed creatures from the planet Tal in the Vilous system. They are one of two intelligent races living in the system, the other being Nevreans.

Real Sergal names are illegible to humans, and so sergals will often humanize their identity with either human names or translations of their sergal names into Galactic Common. It is popular for sergal surnames to be named after meteorlogical or astronomical phenomena. Examples of sergal names could be things like Jeffrey Snow, Mortimer Rain, Haley Comet, Aisha Star, etc. Sergals will also sometimes attempt to come up with uniquely exotic names that sound phonetically similar to their true sergal name, so as to stay distinguished from human culture. However, these names are often difficult to read and pronounce.

Sergals are biologically similar to mammals. Their noses are slim and pointy, as of the nose of a shark. They have rodent-like fingers, feet similar to a kangaroo, and a noticeably raised breastbone which is apt to be mistaken for a lump of fluffy fur in center of their chest. All sergals possess powerful, dense muscles said to be similar to that of a chimpanzee. Female sergals will sometimes have breasts, but this is a recessive trait that is in decline. Though sergal ears appear similar to canines, they actually lack any clearly visible external auditory meatuses (ie; ear holes) on the outside. Strictly speaking, their meatuses are facing backwards (in relation to a dog/cat/fox's). In addition, due to their long fur, it is very difficult to see their meatuses at a side view as well.

Their eyes face outwards, such as a rabbits' or most reptiles', but all child and Northern sergals eyes face frontward. Generally, sergal eyes (excluding those of Northen sergals) grow to the sides of their heads as they age.

A sergal may live between 60 and 80 years of age, but the average lifespan of most sergals is currently 20 - 30 years due to the many threats from dangerous and alien wild creatures living their surrounding environment. The average height of a sergal ranges from about 6 feet to 6.4 feet tall, although this average has shown to be increasing over the past several generations.

While sergals are technically omnivorous creatures, the average individual's basic diet will typically consist of of small animals and fish. Sergals have also historically been known to have cannibalistic tendancies, especially those of the Northern variety, although this behavior is incredibly uncommon among modern sergals.

A sergal's coat may be any range of colors with various styles of markings.

Irises, however, are limited in their color; typically either grey or light blue.

The female sergal also possesses a prehensile clitoral hood that covers their vulva. This hood has been described to "look like a tongue," and has been shown to be capable of grasping and manipulating objects, as well as entering the vagina, possibly to protect it from debris.

Each of these groups have developed their own civilizations due to a world war that is said to have been caused by a legendary figure called General Rain. The Shigu clan which General Rain is said to have led planned the conquest of a whole of Tal. All of these sergal civilizations are however well versed in warfare as a result of past conflicts, and their armor is said to be strong enough to protect against even modern human projectiles and in some cases energy weapons. Southern Sergals wear a lightweight metal alloy armor, which is comprised of an exotic magnesium alloy that is as light as aluminum but nearly strong as durasteel. The exact means by which this metal is created remains a secret of southern sergal blacksmiths to this day. Eastern and Northern sergals generally wear ceramic armor, but this too is capable of absorbing the impact of even the most potent USDF small arms, although the armor will degrade under successive hits. Eastern and Northern Sergals are also known to use bone armor, although this is not nearly as effective. As far as weapons are concerned, Sergals usually favor polearms despite the advent of firearms, and are capable of great feats thanks to their strong, wiry limbs.

Sergals are commonlgy known to be polyamorous and pansexual. When they pick on or flirt with someone, they value appearance most, caring little about race, sex, or even a difference of species. Romance between sergals and humans has become commonplace since SolGov's colonization of the planet, and couplings with Nevareans have been known to happen as well. These relationships will often cross cultural and national lines, occasionally even in defiance of faction rivalries. Furthermore, because homosexuality is not treated as abnormal behavior on Tal, sergals generally don't have antipathy or aversion toward homosexuals. 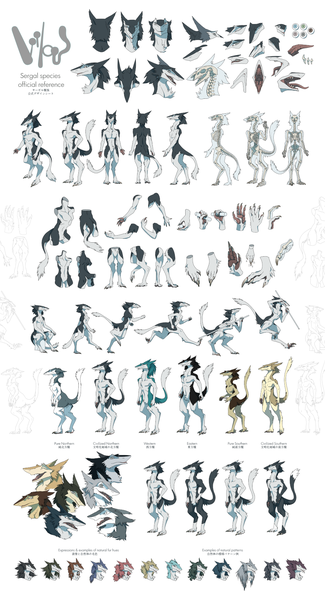 Northern sergals primarily live in the northern regions of Tal in primitive and rural areas near the forest, mainly the Astna Plains. They have long, fluffy manes, usually with white abdomens, somewhat short ears and a thick face. Their primary fur colors are gray, blue, bluish gray, and bluish violet. As noticeable physical feature, they have a facing eyes in comparison with other Sergal types.

Despite the capacity of using more advanced technology, they still usually live in nomadic, primitive tribal communities. It is the result of a deeply religious culture that compels them to live a more naturalist lifestyle.

Due to The Vilous Incident, Northern sergals are very unfriendly toward human inhabitants. They are also historically hostile toward southern sergals.

Southern sergals live in the southern regions of Tal in rural areas, small towns, and the Gold Ring, a city built on the shore of the great Colvilous lake. A large majority live in the Gold Ring. Their appearance differs greatly from their northern counterparts. Southern Sergals are generally shorter, slimmer, and thinner-furred. Their primary fur colors are brown, beige, blonde, and orange.

Southern Sergals consider themselves to be much more civilized and cultured than their northern cousins. They value knowledge greatly, and have no cultural stigma against using advanced technology. When humans formally colonized Tal after the Vilous Incident, southern sergals were generally accepting of the new inhabitants due to the uplift of technology they brought with them. Fashion is popular with Southern sergals, who enjoy dying their fur with a variety of bright colors. Southern women unlike northerns also have their own style of clothing, as they have more obvious gender differences, and the visibility of breasts is more common.

Eastern Sergals are the most numerous type, and are actually a mix of northern and southern sergals who have interbred, and live mainly in the middle-east to southern parts of the planet. They have long, fluffy thick furs like Northern Sergals, and usually have darker mixed colors; such as black, deep-gray, deep-brown, and deep-green. Due to heterosis, they have the largest physical builds among all the sergal races, as well as the shortest ears and thickest faces.

Eastern sergals share part of their territory with southern sergals, and as such, their cultures are very similar. Therefore, fashion trends like fur dyeing is popular among them as well. However, they still maintain some of the nomadic traditions of their northern ancestors, and so eastern sergals are most well known for their superior hunting techniques that utilize new technology with reliable old techniques.

Western Sergals are a less numerous subspecies of northern sergals who live in the northwestern regions of Tal. They are recognized by the cold color tones of their fur, such as green-blue and purple. They share their territory and culture with Native Nevreans, and value artistic expression such as music, poem, and dancing.

This peaceful civilization is said in legend to have nearly been destroyed by General Rain due to Rain's lust for beautiful things. The actual cause for the rarity of western sergals is disputed, but archeologists have found evidence that they were indeed nearly wiped out in an event of attempted genocide by northern clans.

This section has not been written. Come back later.

Due to how recently sergals have come into contact with humanity, NanoTrasen is one of only a handful of companies who have even hired sergals. It should be noted that the USDF has been known to recruit some sergal soldiers to aid in peacekeeping duties on Tal, believing that the native sergal population will respond more favorably to a familiar face should any conflict arise. As a result of this, while it is not common, it is also not unheard of for sergals to have some basic military training which makes them good for Security roles. Southern sergals in particular have been known to make for excellent Engineers as well.

Sergals are originally a creation of Mick Ono. Their lore in Vorestation is a mix of old and new sergal lore that is adapted for our own use. One major change we've made to the lore is that Rain Silves, also known as General Rain, has been made a figure of legend in our lore, which allows for some flexibility and retcons where necessary for sergals to work better in the context of a sci-fi environment.

Most of the lore changes are subjectively chosen for sake of simplicity, flexibility for our players, or to change things we don't like. For example we totally threw out the idea that sergals were at any time similar in appearance to humans (because that conflicts with human lore), and Agudners are not mentioned at all at the time of this writing (because we just don't have them).

If you're interested in the original sergal lore, check out the links below. We may import more elements of the canon sergal lore, but don't expect it to ever be completely the same. That would not mesh with the rest of our server's lore.