Sylvanusians, nicknamed 'Elves' by Humans, refers to a humanoid species that thrives in scattered, dissociated colonies throughout the frontier regions and beyond. While some claim the race to originate from the mysterious planet Ashkel, other factions dispute that claim, alleging that Ashkel may not even exist as anything more than legend.

Sylvanusian technology ranges from utterly primitive in some cases, to being as advanced as the Skrell as is the case with the Auream Imperium. Aureum Sylvanusians in particular are in possession of technology that appears similar to known precursor artifacts. It is not known whether they have developed the technology themselves, or are merely borrowing ancient machinery.

Sylvanusian societies are generally very secretive, refusing to divulge even the most trivial details of their culture to outsiders.

Sylvanusians don't actually exist as a species coded into the server, and must be made using the Custom Species feature. This is intentional so that there's a great deal of flexibility in what your particular flavor of space elf gets to be. However, here are some commonalities we'd like to see across all elves.

Sylvanusians appear to have a similar physiology to humans, but will often have elongated, pointed ears. This feature is sometimes more subtle or more pronounced depending on hereditary traits. Some Sylvanusians living in human space have been known to clip their ears to take on a more human appearance, although these changes will eventually grow back to normal. Snipping ears is not a painless process and is only undergone if necessary to conceal one's identity. The Sylvanusian species is also comprised of two major races; 'Light' Sylvanusians and 'Dark' Sylvanusians. The former will have coloration similar to that of humans, while the latter tend to have a darker gray or a deep blue skin, often accompanied with piercing red or neon green eyes. Sylvanusians otherwise possess little physical advantage or disadvantage compared to humans. Dark Sylvanusians are often photosensitive, but can also usually see better in the dark. (Adjust your character traits accordingly when making one.)

Sylvanusians have been reported to possess anywhere from one to five stomachs. This is based on information gathered from Scion Sylvanusians and appears to also be hereditary, but may also be the result of gene modding similar to splicing.

A great deal of Sylvanusian biology remains unknown due to the secretive behavior of the species.

Sylvanusians are capable of reproducing in the same manner which humans do, but the gestation period of a Sylvanusian lasts up to 18 months.

Sylvanusians differ in gender between male and female in a manner very similar to humans.

Sylvanusians have lifespans far exceeding humans, and do not visibly age. The alleged empress of the Auream Imperium is said to be biologically immortal. Sylvanusians exploring outside of their home system will typically be aged between 20 to 100 years old. Sylvanusians who are aged beyond that typically do not interact with outsiders.

Sylvanusians are an omnivorous species who are also typically capable of swallowing prey whole that are up to 80% of their size. Some Sylvanusians may be able to consume even larger meals.

Sylvanusians are a highly secretive species and are generally distrusting of outsiders. Those who do venture among the interstellar community may even attempt to conceal their species and pretend they are merely humans. Very little is known about the species as a result, but a few things are notable in contrast to other sentient creatures across the galaxy.

Sylvanusians are innately fascinated by the artwork of other species. Artifacts discovered by Xenoarcheology will be highly desirable for them to study and try to make sense of, even if the artifact has no technological value.

Sylvanusians do not view slavery in the same negative context as other races. To Sylvanusians, willingly giving yourself into slavery under a timed contract is a legitimate means of paying off a debt. Carrying debts in Sylvanusian societies is generally seen as highly dishonorable, and they will attempt to pay that debt by any means unless the debt is forgiven. 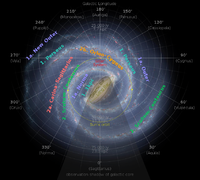 This region of space is impossible to see from Earth-based telescopes, as it is blocked by the densely arranged stars of the galactic core. Nearly all star systems within this shadow are unexplored.

Sylvanusians have been discovered in a handful of scattered colonies throughout Human space; the most major one being the Scion Imperium. However, a much larger galactic superpower called the Auream Imperium is said to exist in the Milky Way's observational shadow, which renders it hidden from any observation by human telescopes. The USDF has encountered the Auream Imperium on several occasions, and the two factions are highly distrustful of each other, but rarely anything close to hostile.

Due to this isolationist and secretive culture, Sylvanusians have no formal relations with any known faction. However, Scion Sylvanusians are known to have an unfavorable view of the more mysterious Auream Sylvanusians.