The virgo 3b colony is called Al'Qasbah. This is the location at which the majority of NanoTrasen employees reside when not actively working, and is where the shuttles and trams bring employees at the end of their shifts.

The total population of the Al'Qasbah colony is estimated to be around 10,000 people. This is made up from a diverse array of species and backgrounds. The colony is populated by a number of corporations, of which NanoTransen is only one, and includes a zorren military presence. 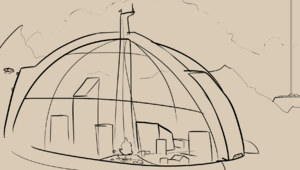 The wealthier domed portion of the Virgo 3b Al'Qasbah colony. Art drawn by Soft.

Most of this colony is underground, the underground portions are generally cramped and not the most fancy, but are relatively cheap and affordable. There is a permanent Zorren military presence in the deepest sections, where Zorren scientists and archaeologists seek out ancient Zorren artifacts and such. A lot of the underground colony itself are mined out tunnels from the digs.

The colony though is maintained primarily as a joint effort between a few different companies, one of which is NT. The Zorren give a lot of sway to the companies on Virgo 3b because, outside of their archeological digsites, V3b is kind of more trouble than it's worth. The utility that the Zorren get is easy access to digging, in an area heavily maintained by these corporations, and in return, everyone else gets to live on the moon.

The underground part is mostly tunnels, kind of claustrophobic and dinky. However, in addition to these cramped, hidden areas, tt has a section on the surface that could essentually be called the 'rich part of town'. This area, maintained with a large dome that allows residents to see outside, houses commercial, office, and residential buildings, with a control spire and landing platforms. Those that live in the dome are fortunate enough to have much more modern and relatively spacious (although still limited) homes in which to live.

However, the underground is much larger comparatively. There are far more expansive networks of caves and excavated tunnels that have been furnished at least well enough to live in, although the quality varies and many include only the basic necessities.

Central Command (the location where the shuttles and trams arrive after a shift) on Virgo 3b is part of the Al'Qasbah colony, which is LARGELY underground. Central Command is near the edge of the dome and close to the surface of the moon, making it accessible by both underground tram and incoming shuttles. There are a number of elevators available in this area that allow people to travel to the various levels of the colony underground and up to the more wealthy upper portions.