This section or article is being updated. Certain details are subject to change. You can help this by contributing.

Welcome to Virgo-Erigone (Virgo for short), a system within the Coreward Periphery, one of the two current frontiers of Humanity they pay even a modicum of attention to. This is due to the reason you are stationed here: The gas giant Virgo 3. Being a massive ball of liquid and gaseous phoron, Virgo 3 is one of many of the Coreward Periphery, where a phoron heavy star has gone supernova millenia ago, scattering the coveted material over nearby star systems, just waiting to be exploited.

As an employee of NanoTrasen you can be expected to be working at one of the various NT facilities within Virgo-Erigone. Currently there are three deployments (or maps) within rotation. The first is the NSB Adephagia (colloquially known as the Tether), which is a phoron research facility located on Virgo 3B featuring a space elevator. The second is the NRV Stellar Delight, a small emergency response vessel. Finally there's the NSB Rascal's Pass, a recently established facility located on Virgo 3C. NT is always looking for new places to exploit explore, so more deployments may be added to the rotation in the future.

Currently, the map rotates every Sunday between the Tether, Stellar Delight, and Rascal's Pass in that order. This usually occurs at xx:xx UTC, give or take a few hours depending on the timing the currently active shift ends. 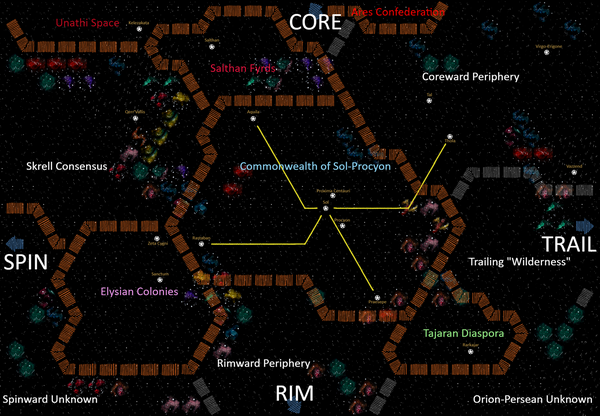 Sol and its interstellar neighbors. Virgo-Erigone can be seen in the upper right within the Coreward Periphery

>-Put some lore about Virgo itself here, talk about Virgo 3B and its colony a bit more. That kind of thing-

The NSB Adephagia, or more commonly Tether, is located on the second moon of Virgo 3, Virgo 3B. The moon has a cold atmosphere of highly prized phoron gas, making it a prime location for NanoTrasen to exploit. The facility itself is a research establishment on the surface, but its main feature is the massive space elevator allowing easy transport of the moon's resources into orbit.

Most of the crew's facilities are located on the third floor, which features a majority of the departments as well as the bar, kitchen, and various recreational areas. The first and second floors are mainly extensions of the departments on floor 3, however floor 1 is where the dorms are located as well as the tram station to the Virgo 3B colony. The space elevator itself can take crew up to a 'midpoint' which is another relaxing recreational area, but more importantly it leads to an asteroid in geosynchronous orbit which features the power plant as well as docks for spacecraft and mining shuttles.

The NRV Stellar Delight is an emergency response vessel. While it is typically found orbiting Virgo 3B it is able to move about the sector, typically for Virgo 4 beach vacations responding to non-combat emergencies that may occur in the system.

The crew will find themselves spending most of their time on deck 2, which features a bar and kitchen as well as a recreational space at the fore of the ship. Also on deck 2 are the bridge and medbay located amidships, while engineering spaces and cargo are located at the aft. Deck 1 is where the dormitories can be found as well as the library and science department. While deck 3 is primarily maintenance spaces there is a staircase across from medbay leading to a cafeteria as well as officer quarters, while the aft is where the dock for the transfer shuttle can be found as well as the NTV Starstuff.

Rascal's Pass is a recently constructed facility located on Virgo 3C, a moon with a breathable atmosphere and a decent amount of volcanic activity. As the name implies the facility is tucked into a valley and crew will need to watch out for drops from high cliffs if they want to avoid injury.

Most of the crew's facilities are located on the second level on the western portion of the base, accessed by the staircase directly northwest when stepping out of the cryo/teleporter room. Here they will find a very sizable bar with a separate kitchen to the south and a bridge leading to science even further south. To the north of the bar is a staircase to the transfer shuttle, as well as a path to the library and dormitories. Following the path east past the chapel there is the medbay as well as the cargo office. While there are other points of interest these are the ones most crew should know about. It is wise to stick to the footpaths, as there is vast wilderness and cave systems off the path and it is very easy to get lost if going unprepared.

The second moon of Virgo 3 is where the NSB Adephagia is, but is also . (needs more info))

The third moon of Virgo 3 is where the NSB Rascal's Pass is located. It is a verdant moon with a breathable atmosphere but it is volcanically active.

Virgo 2 is a planet with a dense atmosphere, similar to Sol's Venus. There are a multitude of floating aerostats, one of which is accessible to the science department via quantum pad for use in research, typically when stationed on the Stellar Delight where there isn't enough room to do more dangerous experiments safely. The surface of the planet is also a viable mining location, however one has to be prepared for the extremely high temperatures and crushing atmospheric pressure.

Virgo 4 is a planet owned by the Zorren or something and has a beach blah (more info needed...)