Difference between revisions of "Guide to Vore"

So there are some specific features/settings we've added that you might not realize at first from playing on other servers, so here's a short list of features to be aware of: 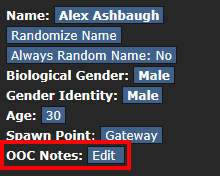 You see this button? Press it!

Here's what everyone should at least have in their OOC notes:

So with that in mind, here's an example of well written OOC notes:

Vague notes or anything like "anything goes" does not offer real admin protection - you can still request a scene to stop and that will be honored, even if admins have to intervene, but we cannot steer people to avoid topics you do not like without you having concrete notes about what you specifically do not like or like.

If you find out that you do not like something, you should put it in your OOC notes.

Not enjoying vore is alright, however you should be aware that Vore is a central theme of the server. People will discuss it publicly and enact it in public areas. As long as you do not interfere with that, you are a-okay.

How to eat people

For micros, the process is even simpler:

This is the location of any vore-based commands you might need!

The vore panel displays a list of the bellies you've created on your character, allows you to save them, and also set up any preferences you might need (such as being indigestible if you have a strong preference against being digested).

Bellies can be created and deleted on this panel (though only deleted if they are empty). You can also view the contents of the bellies, release individual people and items, and customize various settings about each belly.

There are various belly modes that you can choose from, which are each listed below.

When you are inside a predator, the top of the vore panel will display the description of the pred's belly that you're held in, as well as anything you can see around you, such as items or other prey. You can interact with them by clicking on the buttons with their names.

This option is to allow you to leave a predator. It should only be used in situations that call for it, such as a predator that has disconnected for a long time and left you stuck in there, or as a 'safeword' if they're breaking prefs. Using this inside a hostile mob will cause the mob to ignore you for vore purposes, and will instead maul the daylights out of you as soon as you escape. All online admins are notified when someone uses this button.

This is an option for those who don't like digestion as a matter of preference, or have a character that's immune in some way but don't mind being in the same stomach as someone that is digestible. Because it's a preference thing, the admins are notified when someone uses this button. This is saved alongside your other vore/belly prefs. Please only use this if being digested is 'squick' for you. Don't set it to just avoid dying in general. Trying to use it to avoid being eaten by hostile mobs will result in them violently murdering you instead.

In general, people who have been partially digested have brute and burn damage in a 2:3 ratio and may have infections due to the proclivity of burns to generate them. They should be treated suchly. Medical staff should keep in mind that they aren't security, and while they can report obvious crimes, should prioritize the health of the crew over trying to start their own investigations into things.

The hand health analyzer can tell you if there is a living creature inside another, though this could be anything from just a mouse to a human being. The body-scanner's more advanced sensors will tell you in more detail, giving a specific count of humanoid and non-humanoid creatures in the patient.

Additionally, there are two drugs that can be used in the case of vore-crimes to extract still-alive prey from the predators:

Both of these drugs have side-effects, often severe (though generally not life-threatening) and should only be used if absolutely necessary to preserve life.

Below is a guide for both predators and prey about what they should and shouldn't do when playing as or being around Security.

While some of these may have IC reasons as well (not patrolling dorms is an IC privacy issue for Nanotrasen), the below should be regarded as OOC instructions to you, the players. This also applies to ERP.

The definition of a ‘Public Space’ is, in general:

The definition of a ‘Secluded Space’ is, in general:

The definition of a ‘Private Space’ is, in general:

With any of these points, if there is any doubt when it comes to whether or not you should intervene, and what form that intervention should take, it can never hurt to use LOOC or adminhelp. Occasionally global OOC may be required in the event of a radio message getting out that you'd rather not have happened. This is especially important to do if there is suspicion that metagaming may have taken place, which breaks server rules.

NB: The term ‘vore criminal’ is used above to indicate someone committing a crime involving vore. However, if the potential criminal committed (for example) assault in public, then ran into maintenance to escape security and grab someone to eat in maintenance, this does not magically make them require LOOC prompting to move to a private space. They are still accountable for their other crimes.

(due to a wierd bug with links not working properly Definitions from the RFC document will be provided.)

While unwilling vore is most certainly a crime (even if you don't digest them, it's still kidnapping!) players should still be OOCly lenient when it comes to prosecuting them. For instance, if someone would normally be serving 30 minutes, it's okay to OOCly 'timeskip' it and just pretend they served the full sentence rather than making them sit out of the game for... well, doing what we're all here for. However, as a predator, you shouldn't be lazy about how you go about abducting your potential snacks just because of that

Remember that the AI can see you too. Although soft-vore is hard for the AI to notice as a problem, if the AI sees blood, expect a response from medical and security staff. So try to get in the habit of breaking cameras, or better yet, just stay where cameras can't see you, like deep in maintenance. Preferably in a hidden room.

Security cannot legally interrogate predators about their contents without cause, as this is considered a search, and can only be done when and where searches are legal. Searches legally include trying to force people to disclose the contents of things, and this extends to predators and their 'contents'.

NB: Staff isn't supposed to have X-ray or thermal goggles because of Nanotrasen's privacy policy, so even if security finds you in an unwilling scene through such means, you can probably get the charges dropped by contacting CentCom.

As unwilling prey, if you OOCly want to be eaten but ICly don't, it's good to "slip up" and forget you have your radio in the panic of the moment, or similar. At the very least, LOOC your predator and check before you just blurt out "HELP" over the radio or PDAs - for some of them, it's a bit of a moodkiller.

After all, if you, the player, want an RP scene in which you get snatched and gobbled up, why make people jump through hoops to give you what you want? Likewise, once you're in a belly and your predator is running off - even if you do have your radio, maybe play it out like the signal's muffled, or surrounded by glorping noises, or you're panicked and don't know where you've been carried off to, or you didn't get a good look at whoever snatched you and dragged you into maintenance - all these things can be fun things to add to an unwilling scene without the torches and pitchforks mob beating a path to your door.

If security do get to a predator in time to rescue their hapless prey, and the predator doesn't ICly want to cough them up, there are a couple of things they can do. They can roleplay out holding them down while someone reaches an arm into the predator's throat or some other issue, or a chemist could give them certain drugs that would induce vomiting or force a predator who has absorbed their prey to un-absorb them.

Be aware that surgical extraction of prey is not supported by game mechanics, and can be a preferences issue for some people. You can still roleplay like you're surgically removing a prey, but it's up to the predator to actually let them out or not.

In some cases, Security will just have to accept that there's nothing they can do for a victim. If that's the case, escort the predator to a jail cell and arrest them normally while their victim gurgles.

The AI and Cyborgs are both capable of getting involved in the action - AI by way of hardlight holograms, and some cyborg modules (specifically the K9 and other dogborg variants such as the medihound) are equipped with sleeper/stomach modules.

Generally speaking, players are allowed a degree of freedom to "creatively" interpret their laws in a way that gives them an excuse to eat their partners in a scene. If it's kept private ICly, admins are unlikely to care if you outright decide that this shift you suffered some sort of "system glitch" that made you "malfunction" and devour that poor guy that just so happened to have an entry in his OOC notes about how he really likes to be eaten by robots then oh-so-coincidentally decided to hang around near a borg then walk into a secluded room.

Some players find it more fun to stay within their laws and still go around eating people, so go ahead and have fun lawyering your way around them. Clearly if that willing prey over there enjoys being eaten, and you have a law to serve the crew's interests, then stuffing them in your face is not only allowed but possibly even required. you have a law to protect the crew? Where's safer than inside an armoured steel chassis?

The short version is that if it's for vore, we're unlikely to be mad unless you really push it with the law abuse. Much like unwilling vore for normal crewmembers, if it's private and stays in private it's almost certainly fine, it's only if it gets made public repeatedly that people are going find that your character is immersion-breaking.

There are restrictions on what you can and cannot remember about your past life / death, see the Rules, but the reason for those is to make it so you don't abuse memory for revenge killings or screaming out the name of your predator to security.

It's generally recommended that you have hazy IC memories of the circumstances leading immediately up to your death if it was unwilling vore - if nothing else, your predator has taken the time to give you a (presumably) enjoyable scene, so it's kinda a dick move to make them hide from security for the rest of the shift.

A good way to play this is just remembering everything up until before your scene and nothing afterwards if you do get resleeved. This could be handwaved if it was a willing scene. Basically it's to allow noncon scenes to exist. So your last mind backup occurred 'conveniently' before your non-con scene, or perhaps at the end of your willing scene.