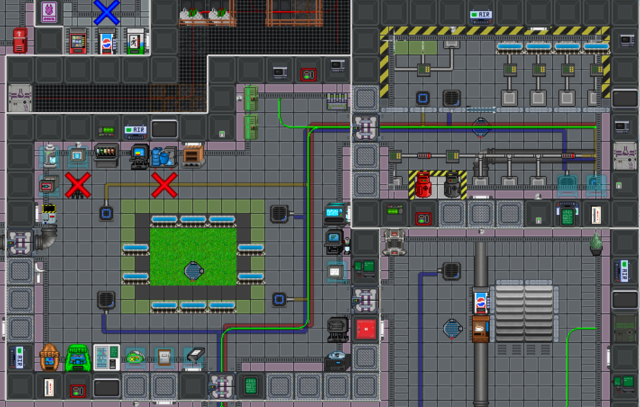 A Xenobotanist is a Scientist who works to determine and manipulate the genetics of plants in space. A xenobotanist works in Xenoflora.

Plants have twelve genes, labelled and ordered at random each round. Each gene represents a set of traits from the plant. These include:

A gene label from any given plant represents the same trait across all plants; in other words, if gene F6 represents products for tomatoes, it will also represent products from ambrosia.

This piece of machinery accepts a seed packet or cutting as well as a data disk. When used to scan a seed, it destroys the seed in order to reclaim its genetic information, which can be loaded onto a data disk a certain number of times before the stored genome degrades completely.

When loaded with a data disk and a seed, this machine is used to apply the gene stored on the data disk to the loaded packet. It will overwrite the corresponding gene on the target packet. Seeds can only be overwritten a certain number of times before they degrade completely and can no longer be modified.

How to Modify Seeds

Kudzu, and other spreading vines, will spread from their tray into the lab. Given time and open doors, a vine plant could spread throughout the station. It will also entangle people who step into an area with thick growth, and may inject any chemicals from its fruit into the people it has entangled. Garden-variety kudzu isn't so dangerous; the dylovene it contains is not toxic. But beware the vine which contains cyanide.

To control a spreading vine:

Some exotic plants emit gases ranging from nitrogen to phoron. Some of these gases are dangerous only when the plant has created so much of them that the pressure in the room is dangerously high; others are dangerous even in small quantities.

To grow a plant that produces gas: